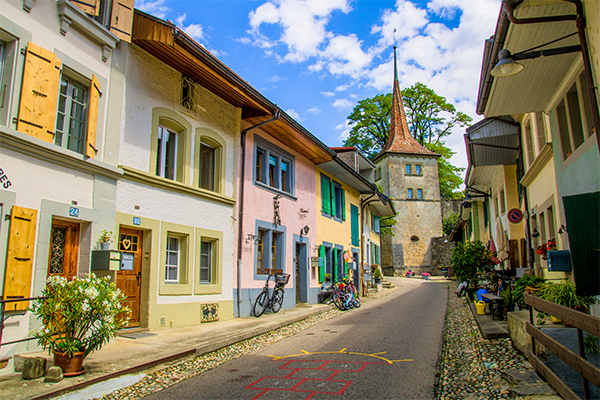 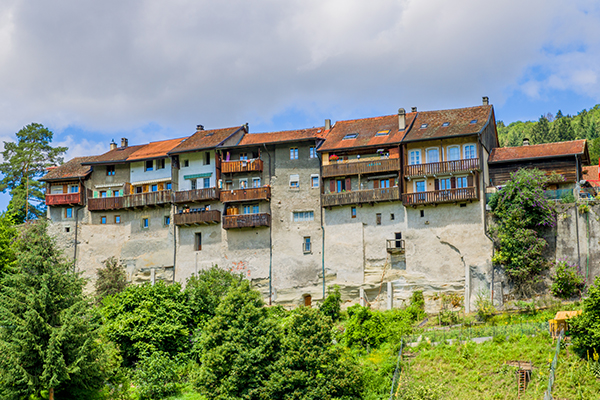 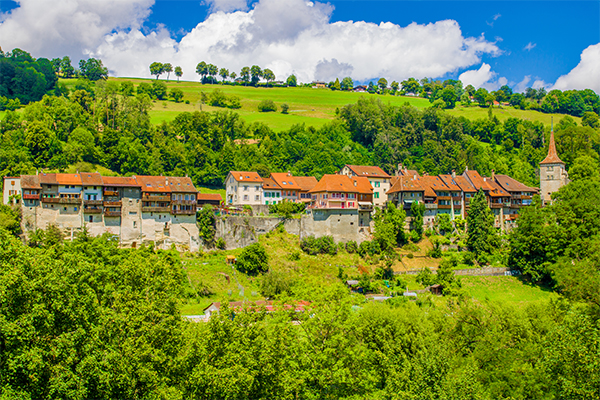 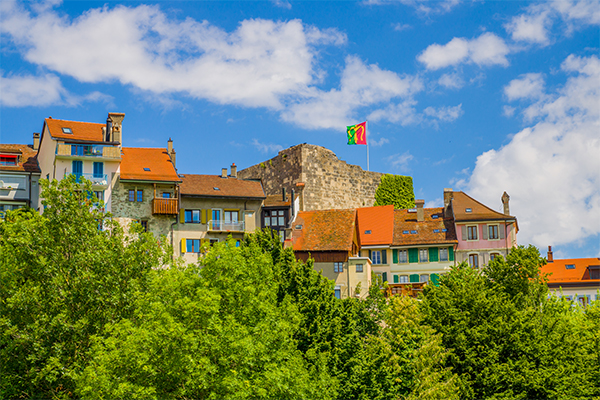 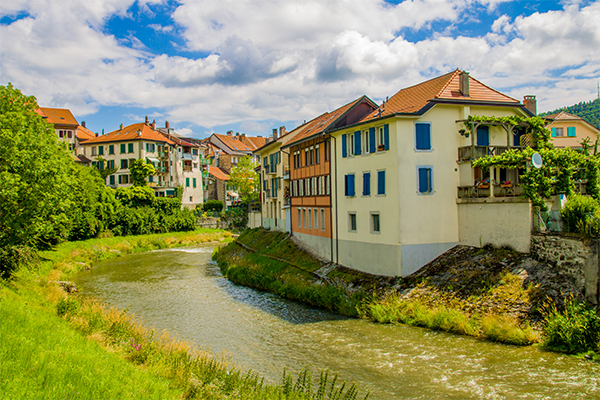 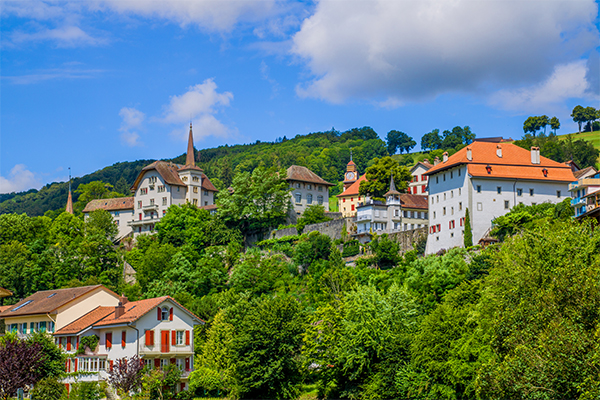 Of Celtic origin, Moudon experienced an important development in Roman times as a station on the transit route between Avenches and the Great St. Bernard. The medieval town was fortified and equipped with a castle. After 1219 it came under the control of the Savoy and obtained franchises in 1285. Under the Bernese from 1536, it declined in importance when the bailiffs settled in Lucens Castle.
Moudon retains its medieval character but no longer has the ancient ramparts and castle. Only the Broye tower, built in the 12th century during the brief domination of the Zähringen, has survived in the old town. Evangelical Church (St. Stephen), after the cathedral of Lausanne the most important Gothic building in the canton of Vaud. It was built towards the end of the 13th century on the site of a Roman necropolis. It consists of three naves and a polygonal choir surmounted by ribbed vaults. The chapels to the north date back to the 15th-16th centuries while the bell tower, which dates back to the 15th century, was part of the town's fortifications. Inside there are numerous fragments of frescoes that cover a wide span of time, from the 13th to the 17th century: in the choir, figures of Saints Peter and Paul (14th century); in the south aisle, scenes from the life of Jesus. The stone pulpit dates back to 1695. The sculpted stalls are very beautiful, the work of Rudolf Pottu and P. and M. Vuarser (1499-1502). In the lower town, near the church, there is the arsenal, already a grain store built in 1774-75. On the other side of the river, in rue Mauborger no. 6, the old hospital of Malta, an interesting building from 1556. Rue de Grenade has a fine group of 17th-18th century houses, including, at number 8, the hunter's house, built in the 18th century with heads and other motifs in the sculptural decoration of the façade; at number 34, Casa de Ceriat, built in 1698 for Loys de Villardin. In Grand-Rue is the town hall (1835-42) with a Roman votive altar under the arches. The Grenette, already a barn from 1861. The Fountain of Justice with a 16th century statue is attributed to L. Perroud. The district of the medieval village, the oldest part of the city, occupies the entire hill overlooking the Broye. Rue du Chateau, maison des Etats du Pays de Vaud (no. 15), a small late-Gothic building built around 1500 where, according to legend, representatives of the States of Vaud used to meet during the Savoyard era. At n.34, the house of Amay whose building substance dates back to the 14th century; it is a reconstruction of the 16th-17th centuries; the very protruding roof is dated 1646. At n. 21, the building of the ancient prisons of the XV-XVI centuries. The castle of Rochefort (n. 50), today a museum, is a vast rectangular complex with a turret on the façade; the south portal dates from 1595. Next to it, the fountain of Moses with a statue of Laurent Perroud from 1557; the basin dates from 1679. The castle of Carrouge (n.47) is a building of the end of the Middle Ages, completely rebuilt in the 18th-19th centuries; in the north-west corner, an elegant portal with the Diesbach coat of arms from 1780 and, at the end of the park, a square lookout tower of medieval origin. At the exit of the medieval village there is a group of interesting houses from the end of the Gothic period (XV-XVI centuries). Outside the perimeter of the town stands the castle of Billens, a noble residence of the 17th-18th centuries.

Culture Festival Walking
print
There are no upcoming events at this time.