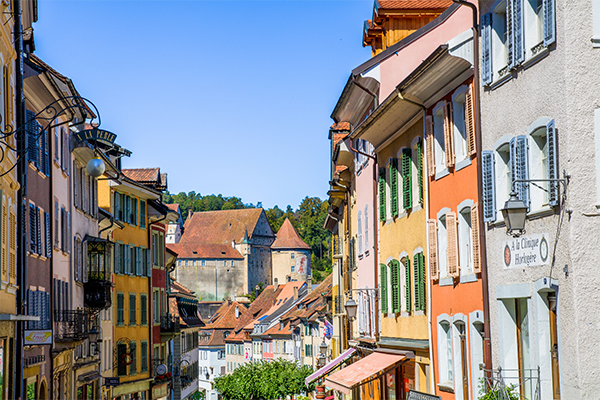 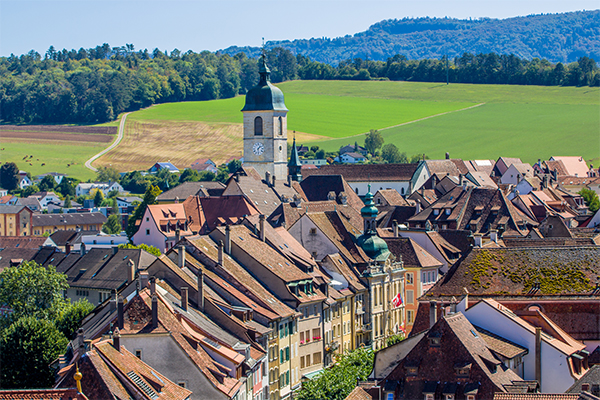 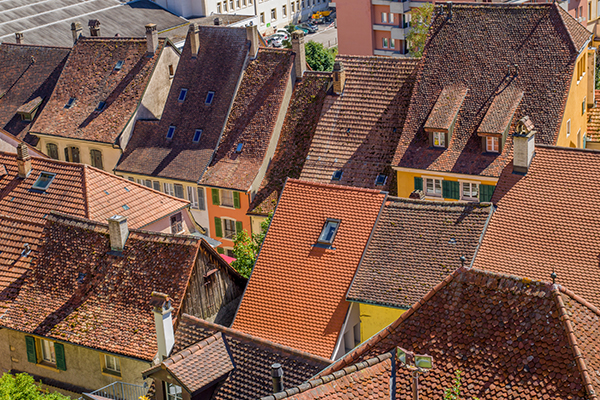 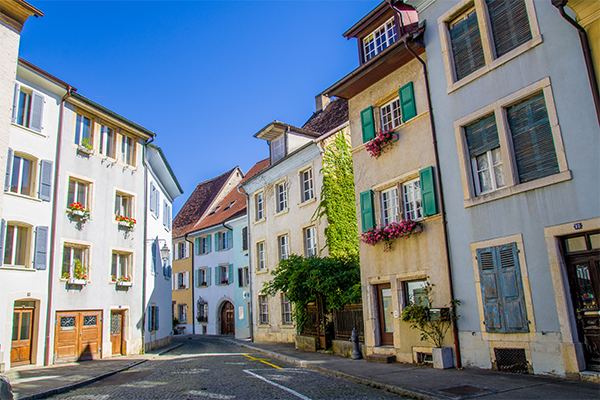 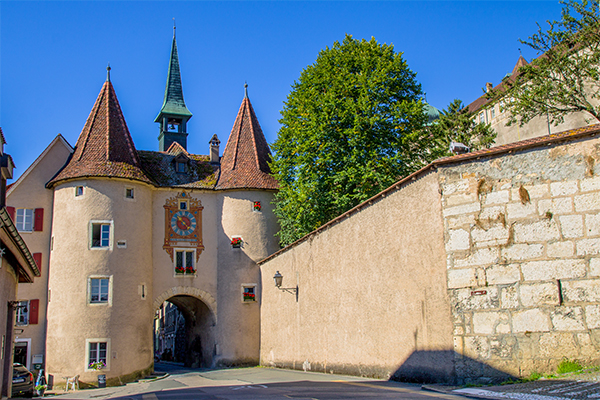 It seems certain that the capital of the Ajoie enjoyed a relative importance already in the eleventh century favored by its position; at that time there is evidence of the existence of two churches. It later became the property of the Counts of Ferrette, then the Lords of Montbéliard, and in 1271 Porrentruy passed to the Bishop of Basel.

The city was controlled more and more by the church. After the Reformation it was the residence of the prince bishops of Basel (until 1792). The old town, defended by the natural protection of the river bifurcation, extends over a rather elongated rectangle. Perpendicular to it, at the foot of the castle, is the Faubourg with the only valuable remnant of the city's fortifications, the "Porte de France", built in 1563.

The parish church of St. Peter is a Gothic basilica from the mid 14th century. The valuable late-baroque side altars are the work of Urs Füeg. The church treasury contains late-Gothic furnishings, including works by Georg Schongauer, brother of the famous painter Martin. To the east of the old town stands the late-Romanesque St. German Church, built at the beginning of the 13th century; the nave was extended and frescoed in 1698. Late Gothic baptismal font. To the south of the old town is the former Jesuit church, 1599-1604, now the main hall of the cantonal school; the octagonal bell tower dates from 1701. The interior is decorated with early baroque stuccoes from the Wessobrunn School. The Ursuline Church, consecrated in 1626, has a rectangular matron's gallery and choir from 1702. It has neoclassical altars.

The oldest body of the castle is the Réfouse tour (refuge) of the early 13th century. To the east of the castle, the Prince-Bishop of Basel, Christoph Blarer, had the Residence, the Chancellerie and the Tour du Coq (with the rooster in the coat of arms, emblem of the bishop) built at the end of the 16th century. Sculptural decoration from the same period as the construction of the portals. Rear (18th century) are the stuccoes above the architrave of the windows, in the Regency style. To the south of these buildings is the pavilion of Princess Christine of Sweden (1697), followed by the Tour de la Monnaie (1591) and the Roggenbach Chapel, valuable for its rich stucco work (17th century).

The town hall, built in 1761-63 by Pierre-François Paris. The exterior, façade on the rue du Marché, blends the superb formal language of French architecture with the lively extravagances of southern German baroque (small bell tower). The same applies to the old hospital, which stands near the town hall, built in 1761-65 by the same architect on a double horseshoe plan; the complex now houses the museum with a modest collection of local history and a pharmaceutical collection.

Another work by Paris is the Hôtel des Halles, a late-baroque building of French inspiration (1766-69) which originally housed an emporium and served as a hotel for the bishop's guests. The Hôtel de Gléresse (archive) was built around 1750 by an unknown architect for the Baron de Ligerz; the articulation of the façade (painted striped pilasters and flat cornices) is similar to that of the town hall. The building houses a valuable collection of books and manuscripts (the most beautiful are always on display).

The fountain of the Samaritans, by Laurent Perroud in 1564, refers to the fountain of the same name in Fribourg. The Schweizerbrunnen (rue des Malvoisiens) of 1518 shows a wild boar next to the standard bearer, which appears in the town's emblem.

The botanical garden of the Cantonal School was founded in 1795 by the revolutionary Lémane on a project by A. L. de Jussieu.

The parish church of Saint Pierre

The Fountain of the Samaritans

Culture Shopping Festival Castle Food
print
There are no upcoming events at this time.